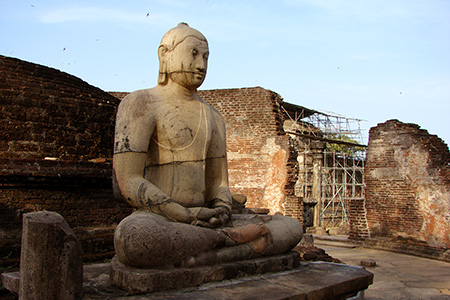 Polonnaruwa was established by the Cholas as capital city under the name Jananathapuram in the 10th century. Under this period flourished Hinduism. Raja Raja Chola I built Vanavan Mahadevisvaram, a Shiva temple at Polonnaruwa named after his queen, which presently is known as Siva Devale. The temple among other contained Ganesa and Parvati statues of bronze. Sri Lanka was under this period ruled under Rajendra Chola I directly as a Chola province. However, following the year 1070 AD ended the Chola rule in the island, and Polonnaruwa was captured by Vijayabahu I. The Ancient City of Polonnaruwa has been declared a World Heritage Site.

Trade and agriculture flourished under the patronage of the king, who was so adamant that no drop of water falling from the heavens was to be wasted and each was to be used toward the development of the land.[citation needed] Hence, irrigation systems that are far superior to those of the Anuradhapura Age were constructed during Parakramabahu's reign - systems which to this day supply the water necessary for paddy cultivation during the scorching dry season in the east of the country. The greatest of these systems is the Parakrama Samudra or the Sea of Parakrama. The Kingdom of Polonnaruwa was completely self-sufficient during King Parakramabahu's reign.