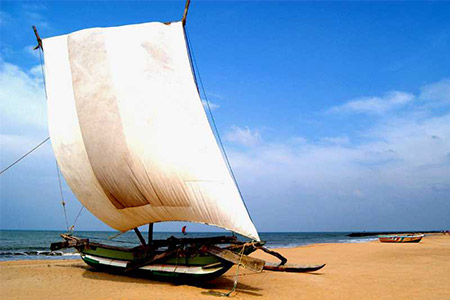 Negombo is a major city in Sri Lanka, situated on the west coast and at the mouth of the Negombo Lagoon, in Western Province.

The Sinhala name Migamuva means "Village of the honeycomb", gaining its name from a legend mentioned in Rajaveliya. The army of King Kavantissa found bee honey in a canoe near the seashore, for Viharamahadevi who was pregnant with the prince Dutugamunu. Because of this, the place was named "Mee-Gomuwa".

The facilities for swimming, snorkelling, diving, wind surfing, deep sea fishing and scuba diving tell you why holidays in Sri Lanka are a compact package that gives you both multiple pleasures and value. Negombo had its early beginnings as a trading port for Arab traders who came to Serendib (Sri Lanka) in search of cinnamon. The trading post survived the three European conquests, adjusting itself to the vicissitudes of both political control and trading opportunities. In the process Negombo evolved in to a smelting pot of diverse cultures, languages, religions and communities.