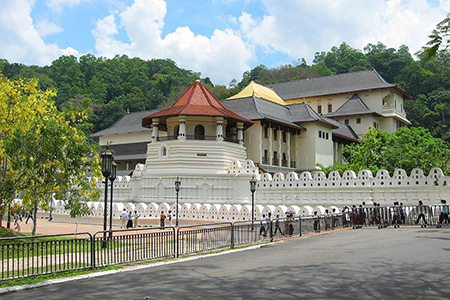 Sri Dalada Maligawa or the Temple of the Sacred Tooth Relic is a Buddhist temple in the city of Kandy, Sri Lanka. It is located in the royal palace complex of the former Kingdom of Kandy, which houses the relic of the tooth of the Buddha. Since ancient times, the relic has played an important role in local politics because it is believed that whoever holds the relic holds the governance of the country. Kandy was the last capital of the Sri Lankan kings and is a World Heritage Site mainly due to the temple.

Bhikkhus of the two chapters of Malwatte and Asgiriya conduct daily worship in the inner chamber of the temple. Rituals are performed three times daily: at dawn, at noon and in the evenings. On Wednesdays, there is a symbolic bathing of the relic with an herbal preparation made from scented water and fragrant flowers called Nanumura Mangallaya. This holy water is believed to contain healing powers and is distributed among those present.

In 1603 when the Portuguese invaded Kandy, it was carried to Meda Mahanuwara in Dumbara. It was recovered in the time of Rajasinha II and it has been reported that he reinstated the original building or built a new temple. The present-day temple of the tooth was built by Vira Narendra Sinha. The octagonal Paththirippuwa and moat were added during the reign of Sri Vikrama Rajasinha. The royal architect Devendra Moolacharya is credited with building the Paththirippuwa. Originally it was used by the king for recreational activities and later it was offered to the tooth relic, it now houses the temple's library.