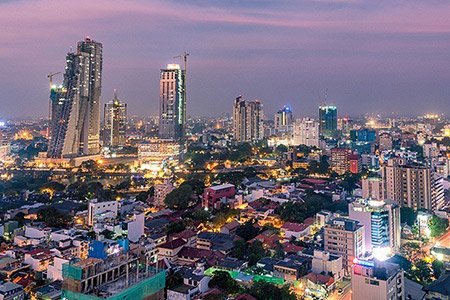 Colombo is the commercial capital[3] and largest city of Sri Lanka by population. According to the Brookings Institution, Colombo metropolitan area has a population of 5.6 million, and 752,993 in the city proper. It is the financial centre of the island and a popular tourist destination. It is located on the west coast of the island and adjacent to the Greater Colombo area which includes Sri Jayawardenepura Kotte, the legislative capital of Sri Lanka and Dehiwala-Mount Lavinia. Colombo is often referred to as the capital since Sri Jayawardenepura Kotte is within the urban area of, and a suburb of, Colombo. Colombo is a busy and vibrant place with a mixture of modern life and colonial buildings and ruins.

Galle Face Green is located in the heart of the city along the Indian Ocean coast, and is a popular destination for tourists and residents alike. The Galle Face Hotel is a historic landmark on the southern edge of this promenade.

Gangaramaya Temple is one of the most important temples in Colombo. The temple's architecture demonstrates an eclectic mix of Sri Lankan, Thai, Indian, and Chinese architecture.

The Viharamahadevi Park (formerly Victoria Park) is an urban park located next to the National Museum of Colombo and the Town Hall. It is the oldest and largest park in Colombo and features a large Buddha statue.