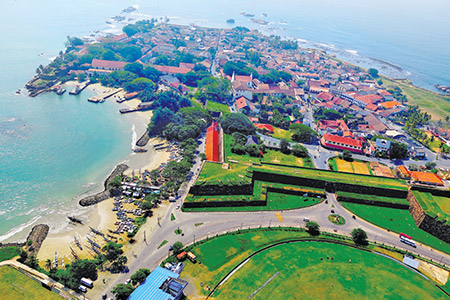 Galle Fort, in the Bay of Galle on the southwest coast of Sri Lanka, was built first in 1588 by the Portuguese, then extensively fortified by the Dutch during the 17th century from 1649 onwards. It is a historical, archaeological and architectural heritage monument, which even after more than 423 years maintains a polished appearance, due to extensive reconstruction work done by Archaeological Department of Sri Lanka.

The heritage value of the fort has been recognized by the UNESCO and the site has been inscribed as a cultural heritage UNESCO World Heritage Site under criteria iv, for its unique exposition of "an urban ensemble which illustrates the interaction of European architecture and South Asian traditions from the 16th to the 19th centuries."

Some of the important heritage monuments in the fort are the Dutch Reformed Church, with its historic belfry dated 1707 and cast in 1709, which rang every hour; the old Dutch government house; the residence of the Commander; Great Warehouse near the Old Gate, built around 1669 to store spices and ship equipment (which now houses the National Maritime Museum); the Old Dutch Hospital; the Meera Mosque built in 1904; the Buddhist temple built at the site of Portuguese Roman Catholic church; the All Saints Anglican Church built in 1871; the 1882 Clock Tower and the 1939 Galle Lighthouse.